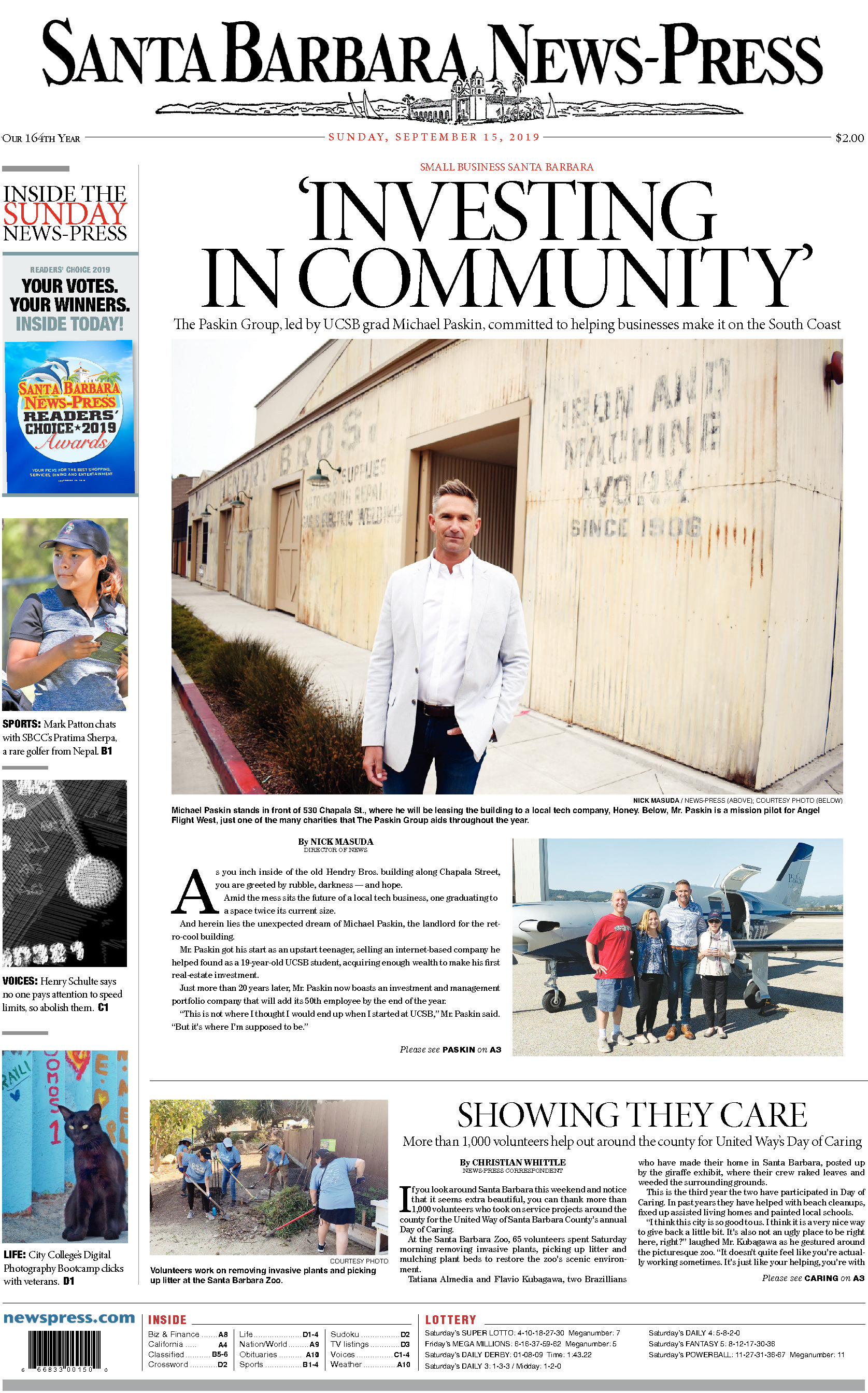 Extra! Extra! Our President and CEO Michael Paskin was on the front page of the Newspress yesterday discussing The Paskin Group, and Investing in Community.

Michael sat down for an interview with Director of News Nick Masuda for an in-dept discussing about how Michael has stayed in Santa Barbara post UCSB, growing The Paskin Group, growing his family, and giving back to the community. 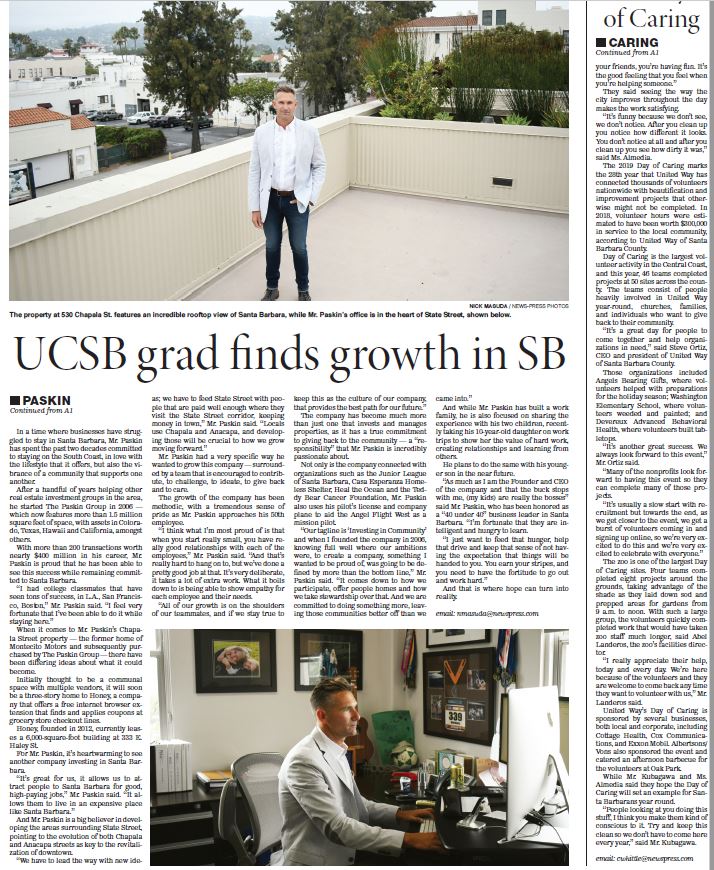 Full article text is below, you can find the original article on the Newspress website here as well.

As you inch inside of the old Hendry Bros. building along Chapala Street, you are greeted by rubble, darkness — and hope. Amid the mess sits the future of a local tech business, one graduating to  a space twice its current size. And herein lies the unexpected dream of Michael Paskin, the landlord for the retro-cool building.

Mr. Paskin got his start as an upstart teenager, selling an internet-based company he helped found as a 19-year-old UCSB student, acquiring enough wealth to make his first real-estate investment. Just more than 20 years later, Mr. Paskin now boasts an investment and management portfolio company that will add its 50th employee by the end of the year.

“This is not where I thought I would end up when I started at UCSB,” Mr. Paskin said. “But it’s where I’m supposed to be.”

In a time where businesses have struggled to stay in Santa Barbara, Mr. Paskin has spent the past two decades committed to staying on the South Coast, in love with the lifestyle that it offers, but also the vibrance of a community that supports one another. After a handful of years helping other real estate investment groups in the area, he started The Paskin Group in 2006 — which now features more than 1.5 million square feet of space, with assets in Colorado, Texas, Hawaii and California, amongst others.

With more than 200 transactions worth nearly $400 million in his career, Mr. Paskin is proud that he has been able to see this success while remaining committed to Santa Barbara. “I had college classmates that have seen tons of success, in L.A., San Francisco, Boston,” Mr. Paskin said. “I feel very fortunate that I’ve been able to do it while staying here.”

When it comes to Mr. Paskin’s Chapala Street property — the former home of Montecito Motors and subsequently purchased by The Paskin Group — there have been differing ideas about what it could become. Initially thought to be a communal space with multiple vendors, it will soon be a three-story home to Honey, a company that offers a free internet browser extension that finds and applies coupons at grocery store checkout lines. Honey, founded in 2012, currently leases a 6,000-square-foot building at 333 E. Haley St. For Mr. Paskin, it’s heartwarming to see another company investing in Santa Barbara. “It’s great for us, it allows us to attract people to Santa Barbara for good, high-paying jobs,” Mr. Paskin said. “It allows them to live in an expensive place like Santa Barbara.”

And Mr. Paskin is a big believer in developing the areas surrounding State Street, pointing to the evolution of both Chapala and Anacapa streets as key to the revitalization of downtown. “We have to lead the way with new ideas; we have to feed State Street with people that are paid well enough where they visit the State Street corridor, keeping money in town,” Mr. Paskin said. “Locals use Chapala and Anacapa, and developing those will be crucial to how we grow moving forward.”

Mr. Paskin had a very specific way he wanted to grow this company — surrounded by a team that is encouraged to contribute, to challenge, to ideate, to give back and to care. The growth of the company has been methodic, with a tremendous sense of pride as Mr. Paskin approaches his 50th employee. “I think what I’m most proud of is that when you start really small, you have really good relationships with each of the employees,” Mr. Paskin said. “And that’s really hard to hang on to, but we’ve done a pretty good job at that. It’s very deliberate, it takes a lot of extra work. What it boils down to is being able to show empathy for each employee and their needs. “All of our growth is on the shoulders of our teammates, and if we stay true to keep this as the culture of our company, that provides the best path for our future.”

The company has become much more than just one that invests and manages properties, as it has a true commitment to giving back to the community — a “responsibility” that Mr. Paskin is incredibly passionate about. Not only is the company connected with organizations such as the Junior League of Santa Barbara, Casa Esperanza Homeless Shelter, Heal the Ocean and the Teddy Bear Cancer Foundation, Mr. Paskin also uses his pilot’s license and company plane to aid the Angel Flight West as a mission pilot. “Our tagline is ‘Investing in Community’ and when I founded the company in 2006, knowing full well where our ambitions were, to create a company, something I wanted to be proud of, was going to be defined by more than the bottom line,” Mr. Paskin said. “It comes down to how we participate, offer people homes and how we take stewardship over that. And we are committed to doing something more, leaving those communities better off than we came into.”

And while Mr. Paskin has built a work family, he is also focused on sharing the experience with his two children, recently taking his 10-year-old daughter on work trips to show her the value of hard work, creating relationships and learning from others. He plans to do the same with his younger son in the near future. “As much as I am the Founder and CEO of the company and that the buck stops with me, (my kids) are really the bosses” said Mr. Paskin, who has been honored as a “40 under 40” business leader in Santa Barbara. “I’m fortunate that they are intelligent and hungry to learn. “I just want to feed that hunger, help that drive and keep that sense of not having the expectation that things will be handed to you. You earn your stripes, and you need to have the fortitude to go out and work hard.”

And that is where hope can turn into reality.